Pam Swynford De Beaufort has fed on many humans. he is smart enough to make sure that no other human or vampire films her doing this. She only feed in the comfort of Fangtasia. 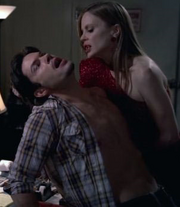 "Dial it back a notch Jethro, you're starting to piss me off"
―Pam, on his moaning

Pam was feeding on her fangbanger in the office at Fangtasia. He was very loud, causing Pam to tell him to dial it down. She is interrupted with her feeding when Sookie called about Eric's memory loss. The male fangbanger is disappointed when Pam leaves in a flash. (Episode: "If You Love Me, Then Why Am I Dyin'?")

"Lay back honey and think of Estonia"
―Pam

Yvetta was a dancer at Fangtasia.

She walks in and is almost immediately hired because of her sex appeal. She has had a sexual relationship with both Eric and Pam. She is from Estonia, a small country in Europe, but she speaks Russian. Yvetta, bitter that Eric left her no money, bound Pam with silver and robbed Fangtasia before fleeing Shreveport. (Episode: "It Hurts Me Too")

Pam and Yvetta
Add a photo to this gallery
Retrieved from "https://truebloodspam.fandom.com/wiki/Pam%27s_Fangbangers?oldid=5267"
Community content is available under CC-BY-SA unless otherwise noted.